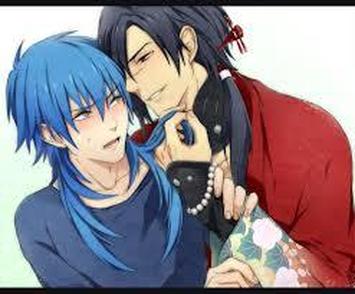 When the world has reached a point of instability, an alarming number of kids begin disappearing. The only known links seem to be a new and highly popular video game or those associated with a particularly peculiar gang that formed recently.  Although Aoba has no affiliation with either, he finds himself compelled to investigate this strange phenomena and find out what has happened to some of his friends. Sounds simple enough right?

Throw in a futuristic setting, a devious team of miscreants, 'All-mate' machines that are owned by humans, An ongoing battle between the gamers and the gangsters, mysterious men in bunny masks, talking robots, grandma's junkyards, the old war of rich vs poor, bondage, battles and Siamese twins?!
​Whew!

This game goes way beyond the virtual rabbit hole and into the realm of sci-fi, adventure and a lot of naughty sadistic and playful fun. Let your adventure begin, but settle in for a long ride; this one packs hours and hours of erotically evil exploits.

As with most yaoi games we give this one an MA rating due to the amount of violence and forced sexual activity. Note that with this being a sci-fi based story, there's a lot of red tape to work through as far as understanding the events that are occurring and references to items that for the most part don't exist in the real world. The stories are quite detailed so the overall suggestion is to make sure you have time to play and fully enjoy the experience.
contains: bondage, violence, sodomy,

Hmmm, anyone else having Naruto flashbacks?

This game is created and owned by Nitro+Chirol.

Where to Find/Buy this Game

﻿﻿﻿﻿Website/Download
https://aarinfantasy.com/forum/
http://www.yaoiotaku.com/
Physical copies of this game have been sighted on sites like E-bay and Craigslist.
It is uncertain where you can obtain official copies.  ﻿﻿﻿﻿
Most of the main yaoi gaming sites carry the Japanese version of the game.

Okay cheating hehehe, found a cool blog by Chem is amani who apparently really enjoys creating walkthroughs (which uh.. not the favorite part hence the lack of walk-throughs on this site mhuhahaha. Sooo easy thing to do: we'll just post the link here!! Then you'll have quality walk-throughs from a young lady who loves making them!!